The world of modern guitars is full of different guitar varieties. The most common variation across all guitars is the wide range of body shapes.

The body shape of a guitar is important for many reasons. However, the cutaway of the body is one of the most vital features of the instrument.

This leads many to wonder: what are the important differences between single-cutaway and double-cutaway guitar body styles? 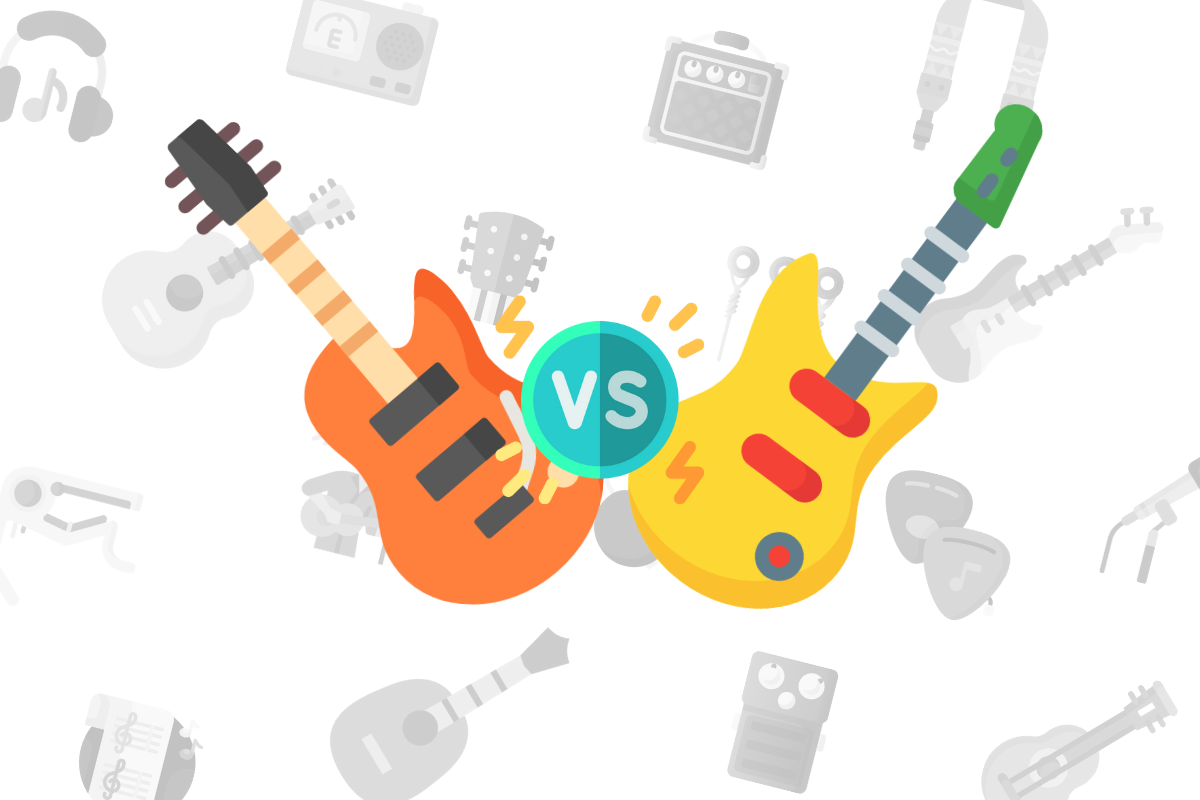 Single-cut and double-cut body styles make a significant difference in the way a guitar is played and how the instrument feels in the hands.

Every guitarist has their own preference, and some body shapes sacrifice function for tone, which leads to much debate about the significance and importance of guitar body cutaways.

Let’s explore the differences between the single cut and the double cut to find out which is better.

There is much debate in the guitar community surrounding single-cut and double-cut guitar body shapes, but there is no denying that single-cut body shapes have very clear advantages.

These guitars come with some drawbacks as well, but players of single-cut guitars often prefer them over double-cut guitars for several reasons.

In short, a single-cut guitar is a guitar with a body shape that only has one cutaway. A cutaway is where a piece of the body has been purposefully removed or “cut away”.

This cutaway is typically at the bottom of the body where the neck and body of the guitar meet.

Read More: All About the Parts of An Electric Guitar (w/ Diagrams)

The cutaway is designed to allow the hand of the guitarist to reach the higher frets on the instrument without having to move over the body of the guitar.

A cutaway makes the guitar much more playable, but it does remove some of the wood from the instrument, which has an impact on the tone of the guitar.

Guitars that have a single cutaway allow the guitarist easy access to the high frets, but the fact that there is no cutaway above the neck means that these instruments are still challenging to play in this position.

The cutaway allows the fingers to reach the frets, but there is nowhere for the thumb to rest, so it ends up behind the body or tucked up under the fingers.

This playing position is very uncomfortable for most guitarists, but only having one cutaway does come with some advantages as well.

Only having one cutaway means that less material is removed from the guitar, which in turn means that there is more wood to resonate and vibrate.

This provides more sustain and better tone in some cases than there would be if the guitar had two cutaways.

The lack of playability at the high frets is offset by a fuller tone and more sustain.

Single cutaway guitars are typically sought-after by guitarists who do not play at the very high frets much but prefer to stay below the twelfth fret where the single cutaway is not an issue.

Pros and Cons of Single Cuts

Single cutaway body styles have several advantages, but they have a few drawbacks as well. Understanding the advantages and limitations of these instruments is vital for learning how to use them well.

The pros of single-cutaway guitars include:

The cons of single-cutaway guitars include:

While single-cutaway guitars are very useful and provide heavier, richer tone and more sustain, guitars that have a double-cutaway body are significantly more playable and much more comfortable in the hands.

This is why they are the style of choice for many guitarists.

The double-cut guitar is favorable for those guitarists who spend a lot of time playing above the twelfth fret or those who require better access to the very high frets on the instrument.

A double-cutaway has a cutaway above and below the neck that allows the fingers to reach the high frets and the thumb to have a resting place above the neck.

This makes playing the high frets of the guitar much easier, more comfortable, and enables the guitarist to use the instrument to its full ability without any hindrance.

These guitars are excellent for lead playing, solos, and virtuosity, which is simply not possible with only one cutaway. These guitars are superior in playability and comfort and tend to be the instrument of choice of the lead guitarist.

However, the body of the guitar is not the only factor that affects tone, and double-cutaway guitars often sound incredible.

Nevertheless, double-cutaway guitars are typically used by guitarists who play a lot of melodic lead or those who need the most versatile guitar possible.

Pros and Cons of Double Cuts

Double cutaway guitars are very practical and versatile, but they have their own set of challenges as well.

Knowing what these guitars excel at and what their downfalls are is important for unlocking their full potential as a guitarist.

The pros of double-cutaway guitars include:

The cons of double-cutaway guitars include:

Both single and double-cutaway guitar styles are better suited for some guitarists more than others. Which is better for you is dependent on how you play, what you play, and what feels better in your own hands.

No one can tell you which body style is best for you. You will only know for sure if you try them both for yourself. Take the time to play with both body styles and discover which you prefer by holding them in your own hands!