If you have been in the world of guitar for more than five minutes, then it’s highly likely that you have heard about a guitarist’s journey known as “The quest for tone.”

Every detail of a guitar is essential to finding that perfect sound, including the string gauge you use. But is one string gauge better than another? Is it better to use light or medium guitar strings?

Light guitar strings feel easier to play since they require less effort to fret adequately. They have a quiet yet bright sound though they are typically more prone to breaking. Medium guitar strings are slightly more difficult to play, yet they provide more volume and a warmer, balanced sound. 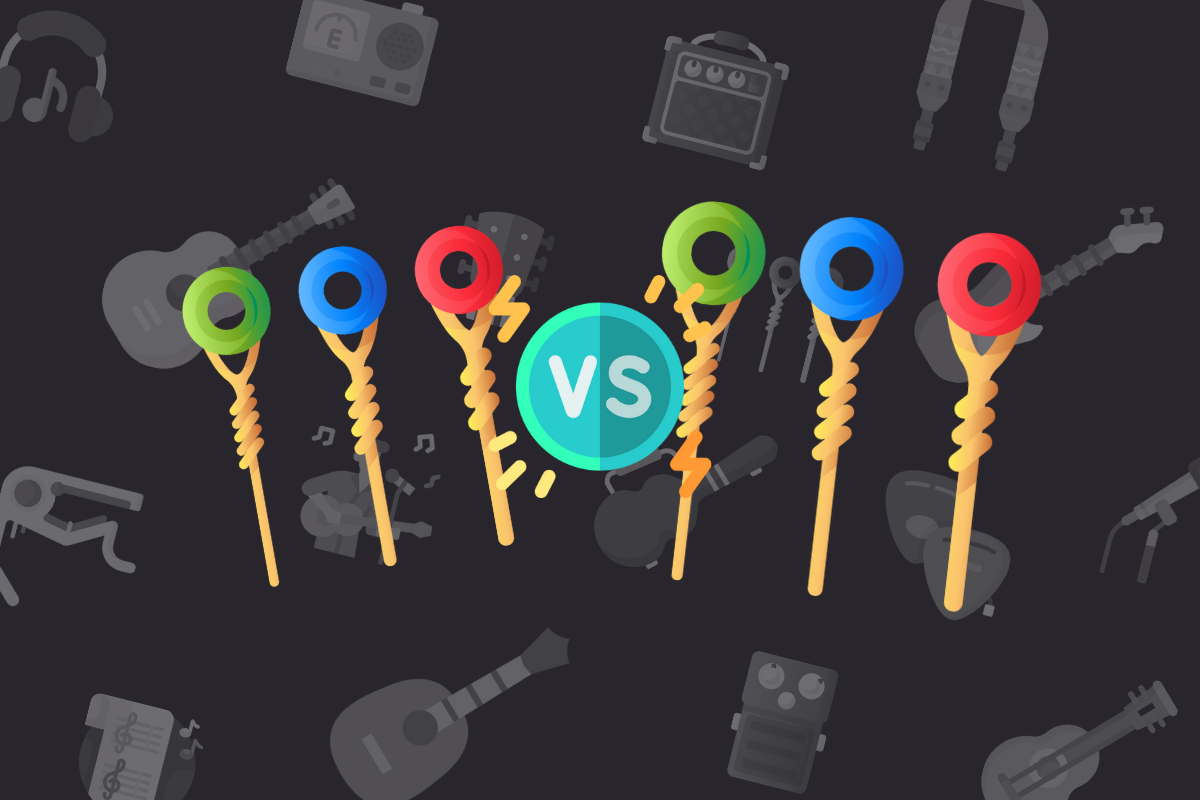 Ultimately, knowing which guitar strings to use can be extremely daunting for guitarists, especially beginners.

However, this does not have to be the case. Understanding the different guitar string gauges and the benefits that each offers will help you find the strings that will work best for the sound you are after.

For people who are newbies to the world of guitar, and perhaps those who have never done the research themselves, the topic and age-old debate of guitar string gauges is one that, more often than not, leaves you feeling more confused than you were before.

This is mainly because the topic is full of contrasting opinions, which makes it feel like there doesn’t seem to be any correct answer.

To lay a foundation, a guitar string gauge refers to the overall thickness or the diameter of the strings you are using.

This is measured in inches. However, because guitar strings are nowhere near an inch in diameter, the measurement that you will see on a pack of guitar strings is displayed as 1/1,000th of an inch. For example, 12-gauge guitar strings will be written as 0.012.

This number typically refers to the thinnest string in the pack, the high “e” string, or the first string.

A typical pack of guitar strings will indicate the thickness or diameter of the thinnest (first) and the thickest (sixth) string in the pack, for example, 0.012 – 0.056. Guitar strings can range anywhere from superlight 7-gauge to super-heavy 16-gauge.

Each gauge will be significantly different in terms of how they feel and sound. Here are the main ways that string gauge affects a guitar and what that means for you as a guitar player.

The first way that guitar string gauge affects a guitar is its overall playability.

This ultimately refers to how comfortable the guitar is to play, from being able to fret the string to performing specific techniques like string bending.

The Sound Or Tone

Secondly, despite the ongoing debate of many guitarists, string gauge undoubtedly affects the sound or tone of the guitar.

Some string gauges are great for getting bright, crisp high-end frequencies and clarity for styles like fingerpicking. On the other hand, other string gauges provide a stronger low-end and may sacrifice the sparkly high-end to achieve that.

It is no secret that some guitar string gauges provide more volume than others.

However, this is only important to consider when playing the instrument unplugged and will be primarily noticed when strumming, which, of course, gets the maximum volume out of a guitar.

With all of that in mind, let’s explore the differences between light and medium guitar strings and the advantages and disadvantages.

First of all, in terms of overall playability, light guitar strings are the easiest to play. While they are not explicitly designed for beginners, they work well since they aren’t too harsh on your fingers and are relatively easy to fret and get a sound out of the guitar.

Light guitar strings also heavily emphasize the high-end or treble frequencies on a guitar, which adds a lot of clarity to a guitar, especially when fingerpicking.

Lighter strings also typically provide less volume. This does not mean that they make guitars soft; they are just less loud when compared to heavy string gauges.

Light guitar strings are also great for smaller-sized guitars since they won’t add too much tension to the smaller, typically weaker necks on smaller guitars.

The advantages of light guitar strings can be summarized as follows:

The disadvantages of light guitar strings can be summarized as follows:

These are generally the most suitable guitar strings for the average guitar player. Medium guitar strings provide a great balance of low-end (bass) and high-end (treble) frequencies.

They’re slightly more challenging to play than light strings. However, they are not nearly as challenging as heavy strings. The medium amount of tension that medium strings provide makes them suitable for any sized guitar.

For electric guitars, gauges 10 and 11 are considered medium, while acoustic guitars add 12-gauge strings into that category too.

The advantages of medium guitar strings can be summarized as follows:

The disadvantages of medium guitar strings can be summarized as follows:

Based on everything that we have covered so far, the answer to this question is absolutely! String gauge matters because it drastically affects the playability and tone of the guitar.

Both of these aspects are important for specific playing styles, meaning that finding the right string gauge for you is essential for the perfect playing experience.

Read More: How Often Should You Change Guitar Strings?

Which Guitar String Gauge Is The Best?

Unfortunately, there’s not a single answer to this question. The answer will vastly depend on the kind of playing you are interested in, the sound you are looking for, and even the size or age of your guitar.

Ultimately, guitar string gauge is highly subjective, so there will likely never be an end to the debate. You need to find what feels and sounds best to your ears – that’s what matters most.

Overall, both light and medium strings are fantastic. Each of them has its particular strengths and weaknesses that need to be weighed up to find out which will be best suited for your style of playing.

At the end of the day, while each has specific advantages and disadvantages, string gauge comes down to personal preference.