At one point or another in your journey of learning to play the guitar, you are guaranteed to end up in a situation where you need to tune your guitar, but there is only one problem – you don’t have your guitar tuner.

First things first, don’t panic! There are several techniques to learn to save you in those situations. Here’s how to tune a guitar without a tuner. 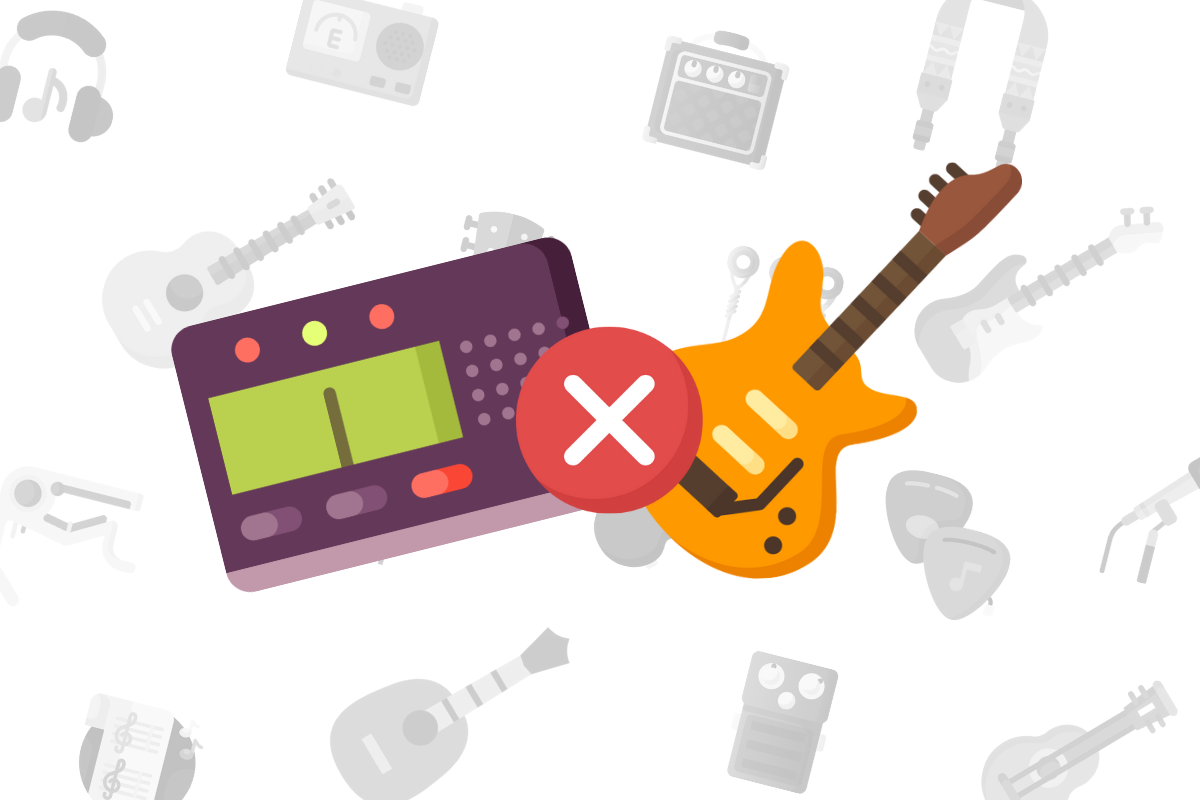 If you have found yourself in a situation without a guitar tuner, or perhaps the batteries have died, you do not need to worry anymore!

Is It Possible To Tune A Guitar Without A Tuner?

Perhaps one of the first things that we should address is whether or not it is even possible to tune a guitar without a tuner.

Mainly as a beginner guitarist, it is entirely understandable to feel like all hope of being in tune is lost without a functioning guitar tuner. However, you will be elated to know that there are, in fact, several ways to tune a guitar without a tuner.

The key to each of the methods that we will be thoroughly unpacking is using your ears. Regardless of the instrument you choose to play, training your ear should be considered a fundamental practice for any aspiring musician.

Indeed, training your ear regularly will directly benefit your overall musicianship and the rate at which you’re able to learn.

So, not only is it possible to tune a guitar without a tuner but it should actually be encouraged! Perhaps not being able to find your tuner or having the batteries die when you needed them most wasn’t such a bad thing after all.

You are now in a position to learn a few new skills that you will use and make you a better musician.

How To Tune A Guitar Without A Tuner

So, now that you’re aware of the value of being able to tune your guitar without a tuner and how these methods will significantly benefit your overall musicianship, it is finally time to dive into the methods themselves!

Without further adieu, here’s a few great techniques to teach you how to tune your guitar without a tuner.

The fifth fret method is arguably one of the most popular tuning methods among guitar players worldwide. It is also an excellent method to use to practice training your ears.

Before diving in, an important note to be aware of is that the fifth fret method is typically used to tune the guitar to itself.

So, while this is an excellent tuning method for at-home practice, it might not be ideal in a band or performing context.

The fifth fret method is used to tune the guitar to itself by using the low E string (the sixth string) as a reference note. For a quick breakdown of what notes each of your strings should be tuned to, from the sixth string down, you will tune the strings to E, A, D, G, B, and E.

Playing the fifth fret of your low E string (sixth string) will give you an A note. This is what we need to tune our open fifth string (A) to.

If you listen carefully, you’ll notice that when the two notes are starting to become closely tuned together, it will almost sound as though the notes are “shaking.” This means that you are very close!

Keep tuning in the same direction that you are turning the tuning peg until you hear the notes “settle” and blend perfectly in tune.

Once your ears are happy with the tuning, it is time to move to the following string! Now you will be tuning the D string (fourth string) by using the fifth fret of the A string (fifth string) as your tuning reference.

Tune the D string until both notes sound exactly the same. The exact process will be repeated on the fifth fret of the D string to tune the G string (third string.)

When you are ready to tune the B string (second string), rather than using the fifth fret on the G string to get it in tune, you need to use the fourth fret as your reference note.

The reason for this is ultimately the way a guitar is tuned. Without making things too complicated, the strings on the guitar are tuned at a distance of what is known as a “perfect fourth” apart.

The notes are closer together by a semitone, which is the equivalent of one fret space on your guitar.

Because the distance between these strings is reduced by the equivalent of one fret, we need to move one fret back on the G string in order to tune the B string accurately.

Your guitar is now perfectly tuned to itself, and you are ready for a fun practice session!

P.S. You can learn more about music theory with a handy dandy guitar theory book!

An alternative method that you can try is to tune your guitar using its natural harmonics.

Once again, this method is an excellent way to train your ears. Like the fifth fret method, tuning your guitar using its natural harmonics is another way of tuning the guitar to itself.

So, although it will be perfect for a practice session on your own, it might not be ideal for playing along with recorded music or in a live setting with other musicians. When using these tuning methods, it is always essential to keep that in mind.

Something to mention is that harmonics create significantly less volume than fretted notes, so you need to ensure that you are in a quiet environment when using this tuning method.

Harmonics are also tricky to play at first, so if you are a beginner guitar player, try to get comfortable playing harmonics before making this one of your primary tuning methods.

A quick tip to make this method more manageable is to use a guitar pick when striking the strings. Using a pick will help you to get maximum volume from the harmonics and ultimately make it easier for you to tune accurately.

Once again, you are going to use the low E string (sixth string) as your reference note to tune the rest of the guitar.

Once again, when you start to get the tuning close, you will hear a “shaking” or a “wobble” of the two notes. Continue to tune until the “wobbling” settles and the notes match in pitch.

To tune the G string (third string), play the harmonic on the fifth fret of the D string and the seventh fret on the G string. Ensure that you turn the tuning peg until the harmonics sound identical.

Similar to the fifth fret method, the exception comes into play between the G string (third string) and the B string (second string). To tune the B string using the harmonic method, you will need to play a harmonic on the low E string (sixth string) on the seventh fret.

Once your high E string is tuned, you are ready to practice a few of your favorite guitar songs with the confidence that they’ll sound fantastic!

Tune The Guitar By Using A Reference Note

A final method to try is to tune your guitar using a reference note. Now, we have mentioned reference notes in the previous steps. However, this method is far more accurate because you will be using a perfectly tuned note as your reference instead of an out-of-tune note.

Tuning your guitar using a reference note requires the use of another tuned instrument or devices like a piano or an in-tune guitar. Playing a tuned note on one of these instruments will help you match the pitch of your strings to each relevant note.

If you do not have a piano or another guitar to use, you can also use a tuning fork or even smartphone apps like GarageBand to play the relevant note on a virtual piano or guitar.

There are even several websites that will play notes for you to use as a tuning reference.

To challenge yourself a little, tune your low E string with a reference note to ensure a perfect starting point.

From there, use either the fifth fret method or the guitar’s harmonics to tune the rest of your strings. Using a reference note is an excellent way to ensure that each tuning method is more accurate.

If you are not yet confident to rely solely on your ears to tune your guitar using any of the tune-by-ear methods, there are some great alternatives for you to try out.

Smartphone apps have become a game-changer in the guitar and music world as a whole. If you have lost your guitar tuner or if your batteries have died, don’t worry; there’s an app for that!

Guitar tuning apps are incredible, convenient tools to have as a backup when you don’t have access to a traditional tuner or if you don’t feel confident enough to tune using only your ears.

What makes a guitar tuning app so fantastic is that they are accurate, and you will always have it with you – because, let’s face it, you always have your phone with you!

There are seemingly endless tuning apps available on both the App Store and the Google play store, and the best part is that the majority of them are entirely free to use.

Download a few onto your phone and see which interface works best for you – GuitarTuna is a personal favorite.

Overall, you never need to stress again about not having a traditional guitar tuner. Training your musical ears is arguably one of the best things you could do, not only as a guitar player but also as a musician.

Using the fifth fret method, the guitar’s harmonics, or a reference note are all excellent ways to tune your guitar without a tuner.