The first step of changing your guitar strings is to remove the current set.  Not all strings are created equally, and there are many different gauges/thicknesses of strings used on a single guitar.

Thankfully, with the right tools and a bit of know-how, you can cut and remove any string you want, both safely and quickly.

There are many different types of guitars, tuning heads, bridges and strings. The process for cutting and removing strings is pretty much the same for the vast majority of stringed instruments. 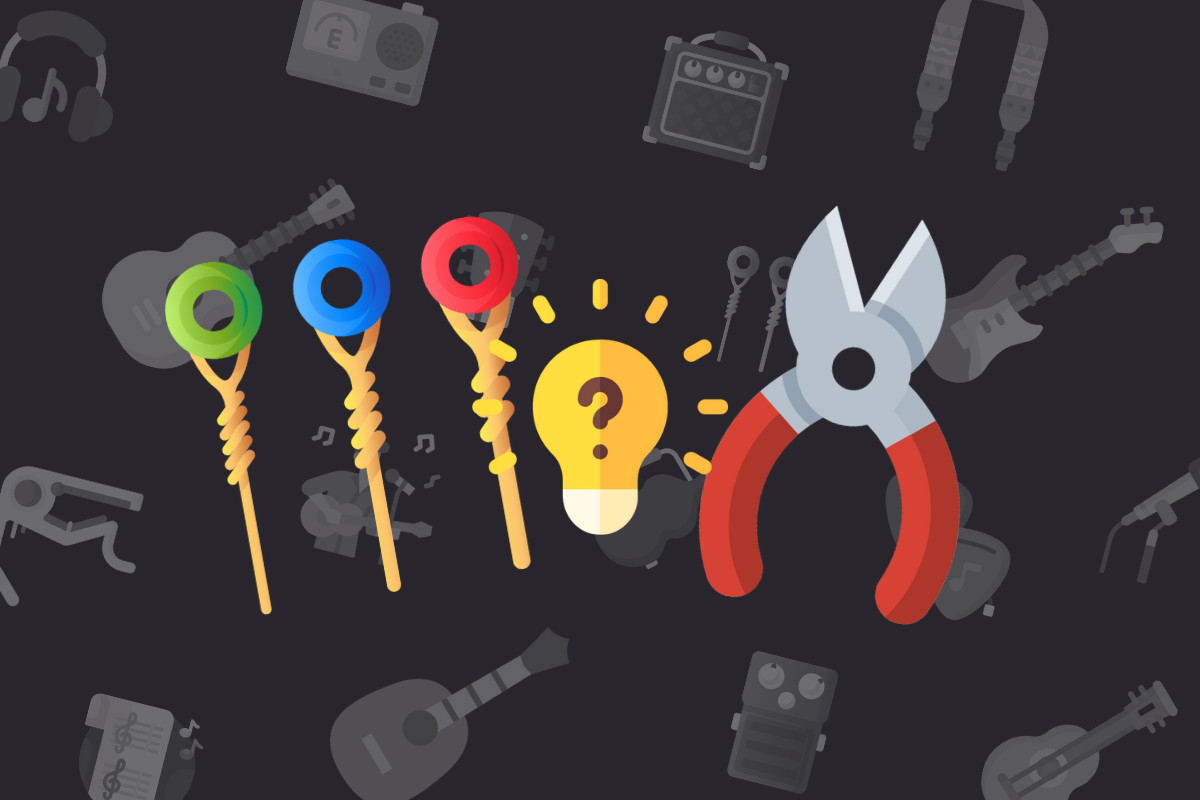 We’ll take a closer look at each common type of guitar and break down the most effective ways to cut off the strings.

What Tools Do I Need to Cut Guitar Strings?

Depending on your type of guitar, you may not need to cut your strings at all! If you do have a type of guitar that requires you to thread the string through your guitar’s bridge you will need something to cut the strings to make them easier to remove.

If you do not have wire cutters, there are a few other options that will work in a pinch.

I generally will not use scissors on strings, as this can damage the scissor blades quite easily, especially on thicker strings.

Keep in mind that most strings are just thin metal (except for clear, nylon strings, of course).  If you have pliers that won’t cut the string, you can kink the string by pinching a loop of string with a pair of pliers.

You can then move each side of the string back and forth to weaken the metal where it is kinked (think about breaking a metal paperclip), and keep working it back and forth until it breaks. It’s not the prettiest or cleanest method, but in a pinch it will work.

There are a few important things to keep in mind when cutting guitar strings.  The points below are important, regardless of the type of string you are cutting.

Step 1: ALWAYS fully unload the tension from the guitar string before cutting the string.

This means that before you cut, wind the tuning head in the direction to flatten the string’s note (decreasing string tension) until the string no longer holds a note, and flops around freely.

Whenever I begin to detune my guitars to remove strings, I always pluck the string to hear that I am flattening (instead of sharpening/ increasing tension) and releasing tension on the correct string.

Cutting a string while under full tension can be both dangerous to you and hazardous to the neck of the guitar.

If a string is cut while under full tension, the sharp ends can whip up and hit you in the hands or face. The repeated, sudden release of tension may also affect your guitar’s action and put unnecessary stress on its components.

Step 2: Whenever possible, cut the string where it is thinnest (this is almost always at the headstock).

Now that you know the basics, you’re probably ready to figure out exactly how to cut these strings off!

How to Cut Electric Guitar Strings

Electric guitars tend to have the most variation when it comes to how the strings are affixed to the bridge. The steps below will help clarify how to cut and remove strings for the most common types of bridges.

Identify how the strings are affixed to the bridge (or what type of bridge you have on your guitar).

Most Fender Stratocaster/ Telecaster style guitars use a tremolo style bridge, where the strings thread through the bridge from the back of the guitar.

Most Gibson style guitars use tune-o-matic bridges that simply thread the string through the end of the bridge.

These types of bridges account for the majority of electric guitar bridges, but when in doubt, look at how the existing strings are connected to the bridge and figure out where the string eye (the part that holds the string in place at the bridge) sits.

This will help you to know how to remove the string once the tuning peg end is cut.

Unwind the string you want to remove/ cut until it no longer holds any tension.

At the headstock, grab the string you want to cut, and unwind the loose string from the tuning peg so that the string can be fully removed.

If your string is not slack enough to do this, continue to unwind the string until you can.

At this stage, you should have the string disconnected with it affixed only at the bridge.

Cut the string so that you have at least 1 foot of excess string at the bridge end and discard the free end.

I usually cut close to the curly end where the string was attached to the tuning peg, since the string is the thinnest here on the low strings (it also makes cleanup much easier).

If you were unable to get the string free from the tuning peg in the previous step, make sure the string is fully slack, then cut the string somewhere in the middle.

Give yourself enough of a tail end at the headstock and bridge so that you have some leverage to push and manipulate the string off of the tuning peg at the neck, and out of the bridge at the other end.

To remove the string from the bridge, push the cut end of the string towards the bridge so that you can grab the eye on the other side of the bridge.

On tremolo bridges, this can be a bit tricky, as the string eye can sometimes get a bit stuck.  Be patient and do your best to maneuver it free, it should eventually dislodge.

How to Cut Acoustic Guitar Strings

Most acoustic guitars do not require their strings to be cut in order to remove them. Strings on an acoustic guitar are held in place at the bridge end by bridge pins that push the eye of the string down through the bridge into the body of the guitar.

If you still want to cut the string off, you certainly can, but I would advise you to leave enough extra string on the bridge end to easily grab once the bridge pin is removed (pulling up on the string can help dislodge a sticky bridge pin).

How to Cut Nylon Guitar Strings

Nylon guitars usually have the string tied to the bridge of the guitar to keep it in place. There are a few different places that the string can be cut that will make removing the string much easier.

How to Cut Bass Guitar Strings

Bass guitars have thicker strings than regular guitars.  Because of this, you may be limited in the types of tools that you use to cut the strings.

In my experience, cutting strings isn’t always necessary to remove bass strings, but every bass is different, and some may require cutting.

Some styles of bass bridges (such as Hofner styles) secure the bass strings in a tailpiece where the strings are not threaded through, but are held in place by tension, once the string is installed.

If you have determined that your strings thread through the bridge of your bass, follow these steps:

Still have some questions about how to cut guitar strings?  Check out these FAQs:

How to cut guitar strings without wire cutters?

Pliers often have the ability to cut wires using the wire cutting area near the pivot point. If you do have pliers, but there is no wire cutter (or it is not working), you can bend the wire with the pliers, creating a kink in the string.

If you continue to bend the wire at the kink, it will eventually break (think of breaking a metal paper clip).

Be careful if you are using this method, as the ends can be sharp. If you are removing the tail ends of the string after installing a new string, I would not suggest this method as a permanent solution.

How short to cut guitar strings?

If you are removing guitar strings, you can cut the string to any length if you do not have any intention of reusing the string (I sometimes keep old E and B strings from my longer scale length guitars in case of a live string emergency).

I would recommend cutting the string to a length that is comfortable to work with if you have to thread the string back out through the bridge, or to unwind off of the tuning peg.

If you are cutting the excess tail end off of a newly installed guitar string, cut the string to have about a ¼” to ½” tail to prevent any possible slippage.

Can I cut guitar strings with scissors?

While scissors such as kitchen shears will likely cut through most strings with a bit of work, it is probable that the strings will damage the blades.

Regular scissors (like for arts and crafts) are weaker than kitchen shears and should never be used to cut guitar strings. The blades can be dulled and permanently damaged.

There are tons of products on the market to help easily remove strings.  Here are a few tools that I think are useful for cutting and changing strings:

This simple winder is a must have in your guitar case. You can find this style of string winder in just about every music store, usually for under $5.

If you’re looking for an all-in-one string changing solution, this string winder and cutter tool from D’Addario combines a string winder tool and wire cutter into one:

If you have an arsenal of guitars like I do, you can opt for a faster option to wind and unwind your strings.

Made by Ernie Ball, this Powerpeg Winder is basically a drill that’s made to fit any tuning peg (however, it’s more suitable for electric guitars, as it does not have a built-in acoustic bridge pin remover).

It makes the tedium of string winding super fast and honestly, pretty fun:

How do I remove a string without any way to cut a wire?

In types of guitars where the string is threaded through the bridge, it is easiest to remove if the curly, tuning peg end is cut off.

However, in situations where you need to change a string, but do not have access to any method of wire cutting, you can straighten out the curled end with your hands, then thread it through the bridge.

If you bend the string backwards (against the direction that it was wound on the tuning peg) you should be able to straighten out this section enough to thread it through most types of bridges.

In some cases, this may cause some minor scuffing around the bridge hole if the tail did not straighten enough (particularly on tune-o-matic style bridges), but in a pinch, it should work.

With the right tools, cutting guitar strings is a breeze. If you plan on regularly maintaining your guitar(s) yourself, I highly recommend purchasing some quality tools to cut and wind strings.

While not every guitar requires their strings to be cut off, cutting them can make changing strings much easier to do. With these tips and tricks for cutting guitar strings, you’ll be changing your strings like a pro in no time!

Jordan is a musician, audio engineer and entrepreneur. He has been playing guitar for over 20 years, with a particular love for the electric guitar. He has played in bands that have spanned genres from folk to rock to synth pop, learning to play as many instruments as he could in the process. He’s also a techie at heart and holds a degree in mechanical engineering, which fuels his endless gear curiosity. You can check out his portfolio at jordanshewmusic.ca.