Playing guitar is very challenging, and there are a lot of elements that must all come together to make it possible.

The condition of your hands is one of the most important factors in playing guitar, which leads many guitarists to wonder: is playing guitar with long fingernails possible?

It is possible to play guitar with long nails, but it can be a severe hindrance. Long nails on the fretting hand get in the way of playing clearly and accurately. Long nails on the strumming hand can be an advantage for certain genres, playing styles, and techniques. 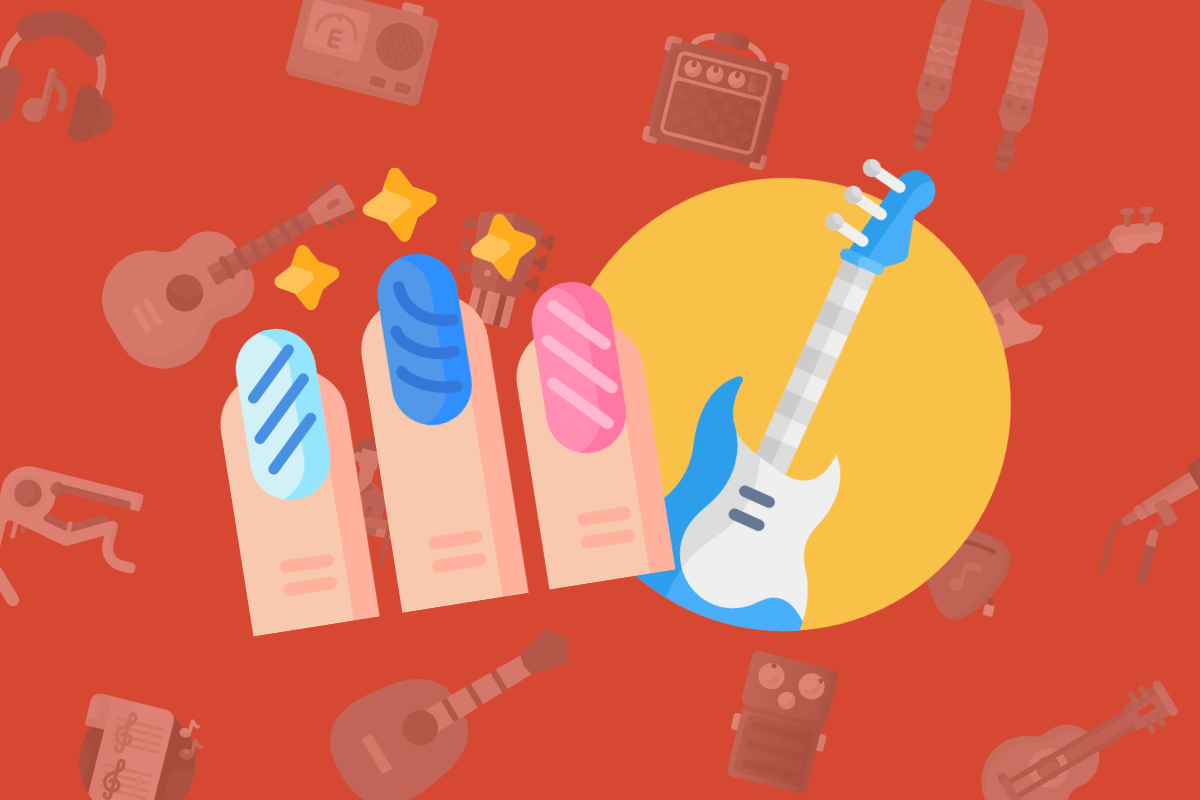 The answer here is more complicated than it may appear at first. Playing guitar with long nails is a conundrum that has been the source of much debate in the community, but there is an answer to suit every perspective.

Let’s take the time to consider playing guitar with long nails, when it works, and when it doesn’t.

Long Fingernails May Affect How Well You Play

Playing guitars with long fingernails is a widely discussed issue in the music industry, especially among music educators and guitar students.

The truth is that playing guitar with long nails requires multiple considerations to determine how impactful it is on a person’s playing.

The way the guitar is played is also a factor here, as the degree of complexity of playing is a factor in how long the player’s fingernails can be.

Anything that requires only one finger to play or anything in open tunings can be played with long nails, but more technical playing does not suit long fingernails at all.

Let’s look a little more deeply into playing guitar with long nails with regard to each hand and find out when long nails are applicable, when it is possible, and when it should never be an option.

Long Nails On The Fretting Hand

Having long fingers on the fretting hand is not usually an advantage for most guitar players, but there are also certain instances where it does not impact playing too much.

Generally, however, guitar players who have long fingernails on their fretting hand will be severely disadvantaged, and their playing capabilities will be drastically limited.

The problem with having long fingernails on the fretting hand is that the nails get in the way of playing accurately and pressing the strings down hard enough to get clear notes from the instrument.

To produce a clear note anywhere on the fretboard, the player must be capable of pressing their fingertip down on the strings firmly and as close to the frets as possible.

Having long fingernails makes this almost impossible and usually results in very dull, deadened notes, no notes at all, or forces the player to use very poor fretting hand technique to achieve any notes whatsoever.

However, if the guitar is re-tuned to an open tuning and the guitarist is playing with one open finger – or a guitar slide – the length of their fingernails will not impact the playing until something more technical or precise is attempted.

For this reason, playing guitar with long nails on the fretting hand is technically possible, but it is not advisable for any guitarist who wants to play anything more than open tuning chords.

Long Nails On The Strumming Hand

The guitar is a multi-faceted instrument that can be played well with a great variety of playing techniques and methods. One of the most versatile techniques for playing the guitar involves using all of the fingers on the strumming hand individually.

This strumming hand technique of using all five fingers for maximum versatility is improved by having longer fingernails on this hand.

If the fingernails on the strumming hand are grown out a little and well-maintained, they act as strikers or plectrums attached to each finger and allow for a greater degree of accuracy and note clarity from the strumming hand.

In this instance, it is often encouraged that a guitarist should have long fingernails on the strumming hand, and many guitarists do, especially those who play finger-style guitar or genres such as flamenco or classical.

However, having long fingernails on the strumming hand can be a hindrance when playing with a plectrum, as it may get in the way of using proper technique or gripping the pick well when playing.

Overall, long nails on the strumming hand are an entirely personal preference for each individual guitarist and usually depend on the style of playing and music that the guitarist enjoys.

Why Is This Topic An Issue For Guitarists?

Playing guitar is a skill that requires much time and effort to cultivate. Part of learning to play well, or improving the skill, is learning to practice well, and the better you practice, the more quickly you will learn.

Practicing guitar can be challenging, which makes it important to make the process as easy on yourself as possible.

For this reason, most guitar teachers and music educators steer guitar students away from having long fingernails, especially on the fretting hand, as this can be a severe hindrance to the practicing process.

If practicing is difficult, the student is less likely to practice, and the less practice that is done, the slower the playing process will be.

Most guitar teachers and music educators make a big deal of keeping fingernails trimmed, not necessarily for the sake of playing ability, but more so for the sake of easy practicing, especially for students of the instrument.

Read More: How Long Does It Take To Learn Guitar?

For more answers to common guitar-related questions, check out these popular posts:

Playing guitar is a challenge on a good day, and having long fingernails can be a hindrance to skill and improving one’s guitar playing ability.

Long nails on the fretting hand are a hindrance, but long nails in the strumming hand can be an advantage if used well – so the answer to this question is multi-faceted.

Every guitar player must find what works well for them. If longer fingernails are not an issue for your playing, then it is a non-issue.

However, if longer nails do hinder your playing, it is better to keep them well-trimmed and under control. Whatever arrangement that allows you to play what you want to play – and play it well – is the right one for you!