Here Are Some of the Best Campfire Guitar Songs for Your Next Gathering!

You know how it goes: you’re at a party with your buddies and everyone’s having a good time. The drinks are flowing, it’s starting to get a little late, and the evening finds itself approaching a crossroads – it could go either way!

Out of the blue, a slightly old and dusty acoustic travel guitar appears and everyone holds their breath for what seems like an eternity. The first chord is struck and – phew – it’s a goody! Pick the right campfire guitar songs so everyone can join in and you’ll be on to a winner. But if you break out a dreary number that nobody’s ever heard of? The night’s done. 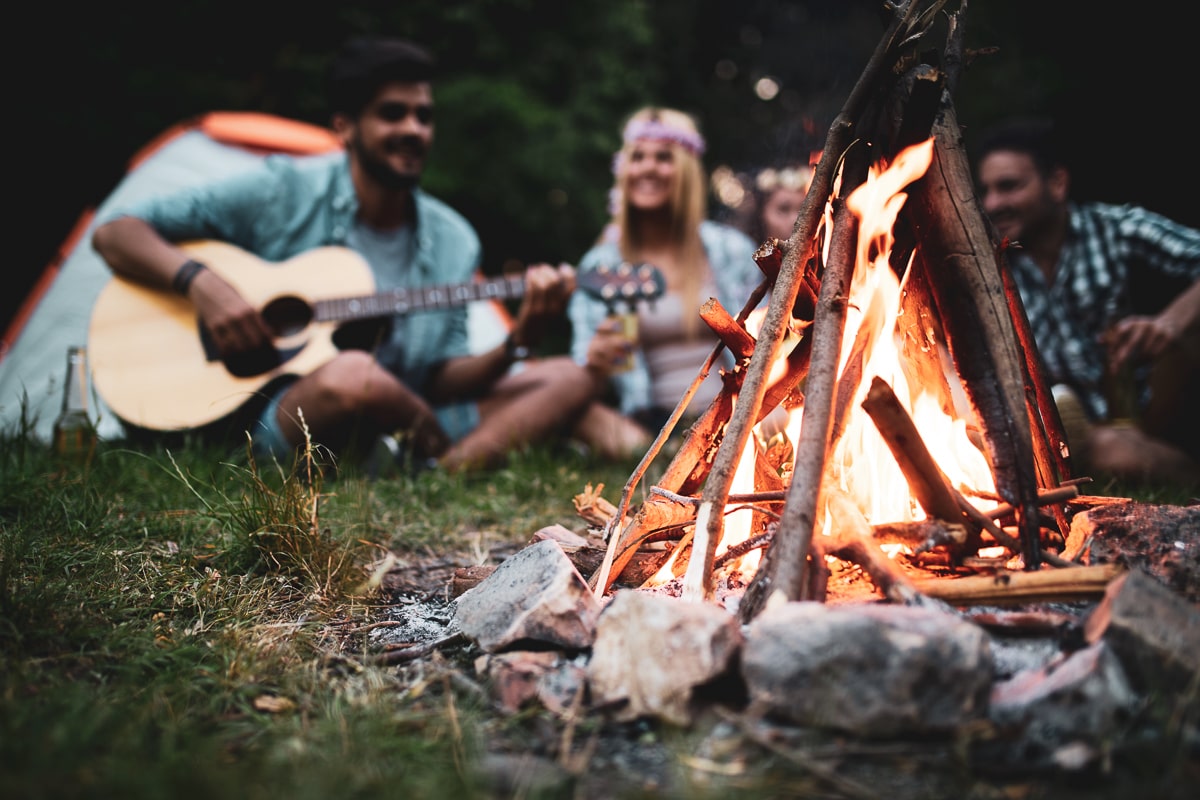 So, let’s make sure that doesn’t happen to you! From classic sing along songs for adults to good guitar songs that just sound right around the fire, here are some classic campfire songs to make you the star of the show with a great campfire song list!

Ring of Fire by Johnny Cash

Is this one of the best campfire songs ever? Perhaps. And if it’s not for you, Ring of Fire is still an absolute classic that pretty much everyone knows the words to. Even if they don’t know all the lyrics, they’ll be able to hum along and join in eagerly with the chorus.

It’s easy enough for even a beginner to get the hang of pretty quickly and has a pretty repetitive strum pattern that is simple to master. There are no barre chords or tricky minor chords to trip you up. And the great thing is that even if you do mess up a little, everyone will be singingly along happily and won’t really notice anyway.

Hey Jude by The Beatles

If you’re searching for crowd-pleasing acoustic songs, you’re usually pretty safe with anything by one of the most iconic bands of all time – The Beatles! Of course, Hey Jude comes to mind as a slower-paced, delightful campfire song that your crowd will definitely be able to join in with at the end. What person doesn’t know the lines “Na, nana, nananana, nananana, hey Jude…”

Overall, the chords are pretty easy (but there are a few of them to remember) and you’ll need a capo on 3rd fret. If you’ve got a guitar player in your life who is an ultimate Beatles lover – a complete Beatles Chord Book makes a great gift for any guitar player.

Now that you’ve got the crowd warmed up it’s time to get them on their feet! This 60’s number is one of the best campfire guitar songs to get everyone singing and dancing.

It’s lively and upbeat and given that it’s composed around 5 simple chords, even an amateur can pull this off at the end of an evening.

Good Riddance (Time of Your Life) by Green Day

It’s always best to judge your audience before you bust this one out! Known as a traveler’s favorite, anyone who spent a gap year in Australia will love you for it, but some might just not get the sentiment behind it.

That said, it’s one of those popular campfire songs that is just a great tune. It’s usually a safe campfire song choice because most people love it and it’s super simple to play on the guitar. It should be suitable for a novice to get to grips with fairly quickly, but the Cadd9 chord can sometimes trip you up.

If you’re not feeling confident then you can always swap it for a standard C chord and nobody will ever notice the difference! PS: If you need to brush up on your chords and music theory, you might wan to consider a music theory book for guitar.

Swing Life Away by Rise Against

Swing Life Away is one of those classic “end of summer” campfire songs that brings people together. The lyrics can really hit the sentimental chord depending on the group you’re playing/singing with.

The song itself is fairly easy acoustic song to play. The intro is just a few notes to pluck – even a beginner guitarist can learn it. After that, it’s all simple strumming throughout the song.

House of the Rising Sun by The Animals

There are loads of really good campfire songs to choose from, but they probably don’t come better known than this. Everyone, young and old, starts to smile as soon as the first note is struck.

There are eight or nine chords involved and a couple of them are barre chords, but this is still a fairly simple song to play along to. The great thing is that you can try out some of the fingerpicking during the song and happily slip back into strumming when you want to give it a bit more “oomph”.

If your crowd is looking for a bit of Neil Diamond, Sweet Caroline is an easy campfire song choice! With a fun intro that is doable for any beginner, the rest of the song is a few muted chords and really simple downward strumming patterns.

Overall, this song is an easy one to play – and what living person doesn’t know what do to at the chorus when it’s time to sing “BAH BAH BAHHHH” after “Sweeeeeet Carolineeeeee”! For this reason, Sweet Caroline is also one of those kids campfire songs that is fun and easy for younger audiences to participate in.

If you’ve got a ukulele, Sweet Caroline is definitely also one of those fun, lighter sounding songs that translate well to ukulele chords.

Boys Don’t Cry by The Cure

This tune can get everyone singing even if the mood has started to lull a little later on in the evening.

It’s not the most difficult song to play, but there are lots of barre chords and you’ll need to slide between four of them in quick succession. So it may not be the best choice for someone who doesn’t have much confidence. A great song, but might be best left to an intermediate player just in case!

I’ve never met anyone who doesn’t know this song! There are several easy campfire songs written by country singers, and this one never fails to hit the mark. There’s nothing too challenging about the composition, but remember your capo as you’ll probably want to put it on the second fret to get the right pitch.

The most challenging thing about this tune is singing the right notes during the chorus, but it usually gets a good laugh when everybody gets it wrong! Definitely one of those summer campfire songs people can have fun with!

A beautiful song that usually starts off with just you singing. For some reason, people like to listen for a while before joining in towards the end. As one of those cool guitar songs – just try not to impersonate Bob Marley as you’re singing!

It’s an incredibly easy song to master and the little opening riff usually makes you look more accomplished than you actually are. You can also drag the chorus out a couple of extra times if it’s going really well.

Chances are if you’re searching for campfire music, you’ll want to include Wagon Wheel on your list of country campfire songs. This classic has been redone and covered by numerous artists over the years but the original is still a classic to play on acoustic. The chords are really easy – you just have to learn the lyrics to tell the song’s story.

Wagon Wheel has become one of those summer campfire songs that gets people singing along but also – depending on your crowd – hits a hard nostalgia chord (pun intended). Even if your audience only knows the chorus lines, it’s enough to bring them delight. “Heyyyyyyy mama rock me” is just too simple not to sing along to!

This song can be a bit hit or miss as one of the great campfire songs. This is because it’s another one of those campfire songs where you need to make sure you’re in the right company and that the mood is perfect before you begin.

You don’t want to kill the evening off if everybody was up and dancing to your previous number and they’re eagerly awaiting your next upbeat song offering.

Personally, I prefer the Jeff Buckley version as the fingerpicking is a little more prominent but still nice and simple, and there are 5 basic chords that amateurs shouldn’t have any problem getting their fingers around.

Maggie May by Rod Stewart

If you’ve got a nice, husky voice and you’re pretty experienced on the guitar, then this tune can really impress a crowd.

It’s got a fairly tricky chord arrangement and the intro could pose a problem if you don’t know your way around the fretboard yet. It’s definitely one of the best campfire guitar songs for an intermediate player.

This is a great, fast-paced guitar campfire song by a Canadian band from the Canadian East Coast.

The lyrics can be a bit of a tongue-twister (and have a few adult themes) but if you can learn it you’ll wow the crowd with it. The best part about this song is that there’s an easy “call and repeat” chorus line that the crowd can get involved with!

As we said, the song has a faster pace and a wild strumming pattern so you can always slow it down if needed. It’s a foot-stomper for sure and a campfire song that people will remember if you can nail it!

No list claiming to have the best campfire songs would be complete without this sing-along favorite.

Everyone knows the lyrics and it’s super simple to play along to. Any beginner can get the hang of the basic chords in no time at all and you don’t usually get past the intro without everybody starting to eagerly sing along.

The original version does contain some sus chords that you might not have heard of, but they’re easy enough to get to grips with. Oh, and you’ll need a guitar capo on 2nd fret if you want it to sound like the original.

If this original version does seem a little daunting, then there are even a few versions floating around that are aimed at simplifying the song for beginners. Over time, you might even work your way up to the Ryan Adams version which is largely done in fingerpicking… it’s hauntingly beautiful.

And there you have it – a rundown of the best campfire guitar songs. There are so many great sing along songs out there that you really have unlimited song options to choose from. Just remember your playing abilities and definitely read your audience and you won’t go wrong. Have a blast sitting around the campfire!